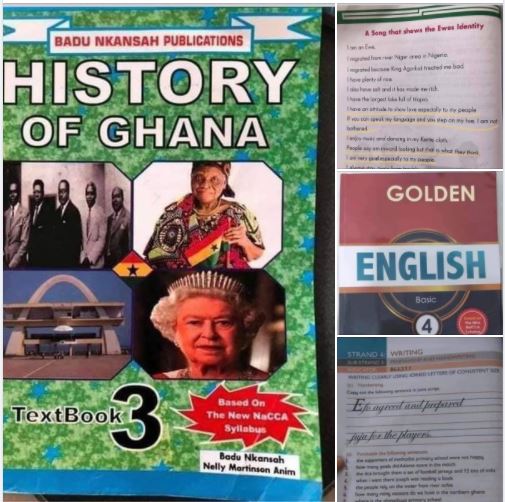 The Ewes demanded an apology from a publisher of the books which sought to misrepresent the narrative about the ewes. Following a statement released by NaCCA which says, “heads of all schools (both private and public), parents/guardians, publishers as well as the general public are to be informed that, it is illegal to use unproved books ( textbooks and supplementary) in pre-tertiary schools.” The follow-up to this statement a series of books purported to be approved by NaCCA was being circulated on social media.

The content of the books attempts to tarnish the image of the ewes, this has raised an uproar among social media users. Therefore, the Ewes has raised the #BurnTheBooks & #EwesDeserveRespect campaign against the publishers.

In a Facebook statement released the group demands that:

Also, in another statement released by the former Deputy Minister of Education HON SAM OKUDZETO ABLAKWA, The Hon member has filed an urgent parliamentary question requesting the Minister for Education to appear before the House and respond to the two bigoted publications.

This is “ to ask the Honorable Minister responsible for education whether the publications titled: History of Ghana, Text Book 3 by Badu Nkansah Publications authored by Badu Nkansah and Nelly Martinson Anim and Golden English Basic 4 authored by Okyere Baafi Alexander both of which contain bigoted content targeted at the Ewe ethnic group have come to his Ministry’s attention; were they approved by any of his Ministry’s agencies and what steps Government is taking to purge our schools and book shops from offensive, divisive and incendiary publications of this nature?”