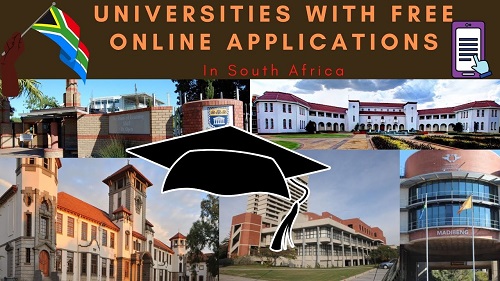 Earning a degree is one of the major steps any young person should take to acquire the competencies to thrive in any career path advancement. The disruptive nature of technology has acquired relevant skills inherent and universities are one of the drivers of this coming future. Usually, getting into a university requires certain requirements depending on the course of study.

However, it is worthy of note that not all universities especially government-funded require application fees to apply for any of their courses.

Since 2005, when it was established, the University of Johannesburg, a public tertiary institution located in Johannesburg South Africa’s capital, has transformed into a diverse, inclusive, transformational and collegial institution, with a student population of over 50 000, of which more than 3000. UJ has a balanced mix of vocational and Academic programs geared towards equality and human dignity. The institution can boast offering diverse courses that cut across Art, Design and Architecture, Business and Economics, education, engineering, health science, law, pure science, and humanities.

Application to UJ can be done both through a printed application form or by applying online via this UJ Online Application Portal. To apply online you need a working email address and a South African ID but as an international student, your passport number is required.

The University of South Africa is the largest in the whole of Africa by enrollment with a population amounting to a third of education students in South Africa. UNISA, as it is called, has over 300,000 students including students from 130 countries as international students. As a comprehensive university with about 9 faculties, Unisa offers both vocational and academic programmes, many of which have received international accreditation and geographical footprint, giving their students recognition and employability across the globe.  Their faculties also known as colleges are listed as follows.

Stellenbosch University is a public research university situated in Stellenbosch, a town in the Western Cape province of South Africa and it is one of the oldest universities in the country.

Stellenbosch’s Vision is to maintain the lead in Research and Innovation that brings the South African Society a great impact. The university has a vibrant cosmopolitan community of more than 32, 000 students including students from over 100 different countries as international students. In 2018, SU launched its vision 2040 which is geared at advancing its core values to provide a transformative student experience, to foster unity and partnership, to promote collaborative teaching and learning to conduct research for Impact, and to position issues as an employer of choice.

It was the first African university to sign the Berlin Declaration on Open Access to Knowledge in the Sciences and Humanities. The faculties in the universities are Arts, social science, pure science, agriscience, law, theology, economic and management science, engineering, military science, medicine and health science, and a business school.

The University of Pretoria is the leading public research university in South Africa with 9 campuses and a business school. They major in courses and research endeavors that hover around economic management, health sciences, humanities, theology, law amongst others. As a research-based institution, it has continuously produced excellently world-acclaimed research outputs.

Application to undergraduate studies for both local and international students after the University of Pretoria is fully online via an UP online application. And it is free!

One major thing so particular about Rhodes University is her continuous effort to attain excellence. Rhodes is one of the oldest universities in the country which has thrived excellently in the areas of academics, outstanding postgraduate research rate, and extracurricular activities. It is a public research university located in Grahamstown in the Eastern Cape Province of South Africa. The school comprises six faculties which include Humanities, commerce, law, science, education, and pharmacy. Rhodes, a small fully residential university has an academic program operating on a semester calendar, beginning in early February to early June, and the second semester beginning in late July and ending in late November. Rhodes Online Application Forms.

The University of Western Cape is a public institution located at Bellville Cape Town South Africa University was established in 1960.  UWC rides on the radar of a rich and conducive environment for research and academic activities. The South African government is a university for coloured people only. UWC can boast of a network of international partners that ensures a flow of students and eminent scholars from other countries to undertake major projects.

Visit https://www.uwc.ac.za/ to apply and join the league of researchers shaping the world through their numerous contributions.

Just as the name implies, you would almost conclude that the application is free.  This dynamic institution of learning is located in Bloemfontein, the capital of the Free State and the judicial capital of South Africa. Established in 1904, UFS offers numerous undergraduate and postgraduate degree programs in Economic and Management Sciences, Education, Health Sciences, Law, Natural and Agricultural Sciences, Humanities, Theology, Religion, and business.

Application to UFS is simply via UFS online application portal.

Tshwane University of technology is an institution that became into existence through the merging of 3 technikons: Technikon Northern Gauteng, Technikon North-West, and Technikon Pretoria with approximately 60,000 students rendering it the largest residential higher education institution in South Africa.

TUT is made up of six satellite campuses- Pretoria, Soshanguve, Ga-Rankuwa, Witbank (eMalahleni), Mbombela, and Polokwane campuses. Admission requirements vary from year to year, however, visit this link for more information on the general and specific requirements as well as Admission Forms PDF.