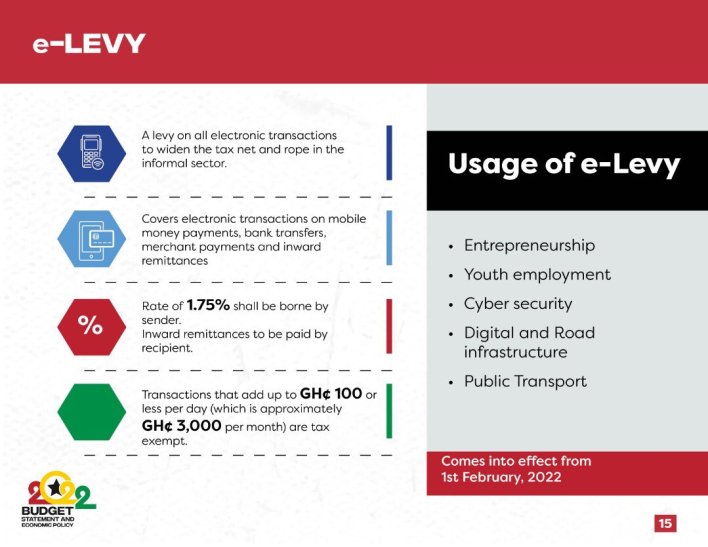 The MOMO TAX Ghana is now a 1.75 percent charge on all electronic transactions (E-levy). This was present in the 2022 annual budget to parliament. The Government of Ghana, as part of strategies to widen the country’s tax net, has announced an Electronic Transaction Levy known as E-levy.

The New MOMO TAX in Ghana

This fee, according to the Finance Minister, Ken Ofori-Atta, is to enhance financial inclusion and protect the vulnerable.

Transactions covering mobile money payments, bank transfers, merchant payments, and inward remittances will have the levy imposed on them and will be borne by the sender.

“After considerable deliberations, the government has decided to place a levy on all electronic transactions to widen the tax net and rope in the informal sector. This shall be known as the “Electronic Transaction Levy or E-Levy”, Ken Ofori-Atta said on Wednesday, during the presentation of the 2020 Budget in parliament.

However, the levy will be waived for transactions that amount to GHS 100 or less in a day or approximately GHS 3,000 per month.

The government says portions of revenue collected from the levy will be used to support entrepreneurship, youth employment, cyber security, digital, and road infrastructure among others.

The government expects that the implementation of the new policy will come into force effective January 1, 2022, if the appropriation is passed.

“Government will work with all industry partners to ensure that their systems and payment platforms are configured to implement the policy”, the Finance Minister added.

He said the total value of transactions for 2020 was estimated to be over GHS 500 billion as compared to GH¢78 billion in 2016 while total mobile money subscribers and active mobile money users have grown by an average rate of 18% and 16% respectively between 2016 and 2019.

It is on the back of this that, the government believes is becoming clear there exists “enormous potential to increase tax revenues by bringing into the tax bracket, transactions that could be best defined as being undertaken in the “informal economy”.