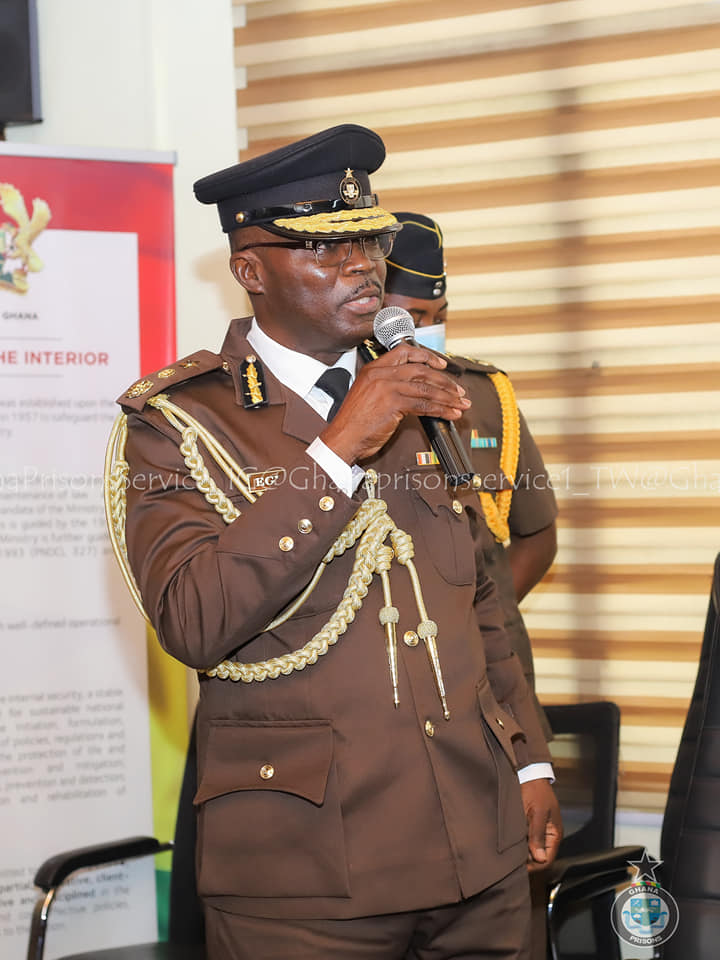 The current Director-General of Prisons (DGP) is Isaac Kofi Egyir. He has been sworn in by the Hon. Minister for the Interior, Mr. Ambrose Dery on Thursday morning, on behalf of His Excellency the President of the Republic of Ghana and Commander in Chief of the Ghana Armed Forces, swore in Mr. Isaac Kofi Egyir as the substantive Director-General of the Ghana Prisons Service.

The confirmation and swearing-in ceremony was held at the Interior Ministry’s conference room on Thursday morning. Mr. Isaac Kofi Egyir was appointed as the Acting Director-General of Prisons on 1st August 2021 by H.E. the President of the Republic, Nana Addo Dankwa Akufo-Addo.

Inducting Mr. Isaac Egyir into office as the Director-General of Prisons on behalf of the President, the Minister for the Interior, Mr. Ambrose Dery stated that the government was looking up to the new Director-General to lead the Prisons Service to ensure the effective discharge of the Service’s constitutional mandate of safe custody, welfare, reformation and rehabilitation of prisoners. He also entreated the Director-General to promote the welfare of officers and ensure adequate and proper recruitment of personnel to meet the manpower requirement of the Service.

Mr. Isaac Egyir on his part thanked the President of the Republic for the confidence reposed in him and gave the assurance that he was going to work hard to add value to the service, especially in the field of agriculture and also ensure that inmates would be trained and equipped with employable skills in technical and vocational programmes so that they would be useful to themselves and society when discharged.  He also pledged to work with the other members of the Prisons Directorate as a formidable team to move the Service forward. He finally assured the President of his resolve to leave the Ghana Prisons Service in a state that will continue to be more relevant in the national development agenda at the end of his tenure of office.

The occasion was graced by the Chief Director of the Ministry of the Interior, Mrs. Adelaide Anno-Kumi, the Technical Adviser to the minister, Mr. Baba Bawumia, the IGP, Mr. George Akuffo Dmapare, Comptroller-General of Immigration, Mr. Kwame Asuah Takyi,  Ag. Chief Fire Officer, Mr. Julius Kuunour Aalebkure, members of the Prisons Directorate, and other senior officers.