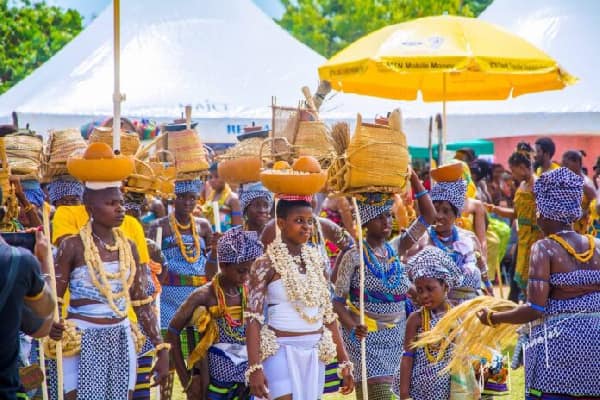 Hogbetsotso is not just a festival for the Anlo people but then a lifestyle born out of rich history and cultural heritage of what I call the “Great Escape” as Ewe from bondage and cruelty to our current location in Ghana.

Anlo Hogbetsotso festival tells a story of Freedom Fighting and breaking the chains of slavery. Our people fought for their freedoms without shedding single blood and this makes for a great Hollywood movie similar to Black Panther.

The “Great Escape” of the Anlo People from the cruelty under “King Agorkorli” of Notsie should have gone down in history just as the “Trojan horse” story Greece used to enter Troy. Because just as the Trojan horse story, the Anlo story was also carefully planned to precision and they succeeded excellently.

Our leaders came up with a solid escape plan which only succeeded because we were united as Ewe! And this plan saw the Anlo Women play the smallest insignificant but highly vital parts which should not go unnoticed.

The Anlo Women did this in silence and secrecy for a long time until they escaped. One reason you can always trust an Anlo wife to be your ride or die.

And then on the day of the escape, there was loud singing, Dancing, and Drumming by the Anlo “Dogbo” people which is always an activity of more women than men. So it was the women who kept the singing alive until deep in the night for the wall to be broken and the escape possible.

And then also after the escape from Notsie came the long journey through Togo to Anloland. And here also the Anlo Women played an integral part to make sure they carried all the needed belongings like food, clothes, and essentials in the “kevi” and “akpaku” bags. They also catered for the children as they journeyed and also found a way to make fire and cook for the entourage to eat among the many other chores and responsibilities they had which made the journey a success.

The Anlowomen indeed came up with ways to prepare foods that would last a long time on the journey. And they crafted food like “Dzowoe” and “Agbelikanklo” among others which are more like snacks but also fill your belly like food.

This food can go days without going bad and our forefathers are said to have always carried this item especially “Dzowoe” to war and it was indeed an essential during the “Great Escape” from Notise.

The Anlomen was Warriors who fought and could stand alone before an army of a thousand and not shiver. And that was the role of the man to protect the women and the Anlomen had enough spiritual powers to make their job easy. The reason every single Anloman would go into battle without hesitation is that he knows he is a “one-man thousand” with his “tsila” on his waist and “Gbesa” on his tongue.

But then the Anlo women would have to use their normal human strengths to do all the work which is also just as important as being a Warrior. And we’ve got to acknowledge the Anlo women and make history remember their sacrifices and efforts continually.

And one fact remains that it is the Anlo Women who secretly destroyed the mystical and spiritual fortifications of the wall in secrecy which made it easy for Amega Wenya’s “adekpui” to easily cause the wall to lose its power and be pushed down for them to pass them uhh and escape. So the Anlo Women are heroes(heroines) we need to celebrate.